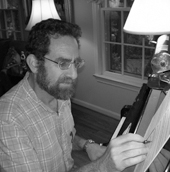 Tony Scialli grew up in Passaic, New Jersey, about 8 miles from the Lincoln Tunnel. In those days, there was nothing to do in Passaic, so Tony spent lots of time standing on Route 3, waiting for the bus to Manhattan. He went with his brother John or his friend Howard, or sometimes just by himself. Favorite entertainments were walking in Central Park, getting an Orange Julius in Times Square, riding the Staten Island Ferry for a nickel, or eating just about anything at the Hip Bagel in the Village. In other words, he was a typical suburban kid bumming around the city. Musical theatre was huge in those days, as it is today only without Disney. Tony didn’t have enough money to see everything, but he saw everything he could afford. The lines for half-price seats were shorter then, and many shows sold cheap standing room tickets. Off-Broadway was then, as now, a treasure trove of great shows at reasonable prices. The musicals Tony couldn’t see, he heard. Records (yes, vinyl) cost about $3, and the Passaic Public Library had a decent collection of original cast recordings that circulated for 5 cents. Tony learned early that some pretty weak books could provide the scaffolding for some luscious scores.

Tony wrote his first musical when he was 16, then got side-tracked by a career as a physician and medical school professor. The first musical, titled The Dragon Slayer, was an adaptation of The Fifty-First Dragon, a short story by Heywood Broun. Although the show was not very good, it served as the basis for a new Dragon Slayer some decades later. The new show was about a writer who has done an adaptation of the Broun story and is obsessed with getting it produced. The lead character is not the writer, but a fictional heroine of the writer’s story, a woman invented by the writer himself. She disapproves of the writer’s single-minded purpose and his lack of basic decency in the way he treats other people.

The Dragon Slayer was cute, perhaps too cute, and Tony turned for his next musical to a more serious and perhaps darker subject. DORA! was written during and about the Bush era in the US, although the infamous 43rd president is never mentioned in the play, and the action takes place 30 years before he was born. The show is timeless: Just as the errors of George W. Bush have been made before, so they are likely to be made again and again, unless someone in charge figures out how to learn from history. His third show, Magic the Musical, avoided politics and focused on a family of magicians with some awkward secrets. Finally, Tony came back to Dragon Slayer, reworking it to exorcise the cuteness.

Tony’s musical education consisted of 8 years of piano lessons. A more upscale bio might say, “He studied with Macy Gordon beginning at the age of 8,” but in fact, Tony spent more time trying not to practice than he did studying. After quitting formal lessons, Tony got the rest of his musical education from the Beatles, Joni Mitchell, Burt Bacharach, Meredith Wilson, and dozens of contemporary composers. Bach, Mozart, Beethoven, and Brahms also lent a hand. Tony won a play-writing contest in college, but that win probably doesn’t count: it was at an engineering school not much given to nurturing the arts. It’s possible that Tony’s entry was the only one in the contest.

Laura is a skillful magician, daughter of the late Jack, better known as the Amazing Jack. She can’t figure out why Jack left his magic equipment to Charlie, a student without much talent. And why is Merlin, Jack’s old friend, so interested in helping Laura avoid the scheming of Danielle and Armando? In a family full of secrets, things are not what they seem as the characters compete to get control of a magic box and its secrets of the universe. Visit the website »

A writer has done an adaptation of the Broun story and is obsessed with getting it produced. The lead character is not the writer, but a fictional heroine of the writer’s story, a woman invented by the writer himself. She disapproves of the writer’s single-minded purpose and his lack of basic decency in the way he treats other people. Visit the website »